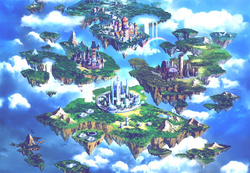 Each of these landmasses have smaller floating islands surrounding them that are attached by long cables meant to hold the lifts that serve as transportation between the islands and central landmass. These smaller islands hold both towns and dungeons.

The governing of each nation is essentially done by humans, though each CPU does have the power to veto any decision. The overall government is called the Basilicom. The CPUs offer passive protection from monsters as long as people believe in them. There are two parts to the Basilicom: the sanctuary which manages affairs related to the CPU and the Parliament which manages the laws and citizens of the nation.

The story of the Super Dimension is different between the two games it appears in.

Originally, Gamindustri was ruled by only one goddess, Arfoire. However, Arfoire lost control of herself and nearly destroyed the world. Due to the efforts of the four legendary heroes from Planeptune, Lastation, Lowee, and Leanbox, the world was saved. Arfoire promised to never abuse her powers ever again and separated a part of her power from herself. This was the birth of Histoire, the tome responsible for recording every event in history and essentially the world itself.

The Guild was known as a group of so-called Heretics. Not all of them serve directly under the Basilicom, but they each worship a different goddess than the one on their native land. It's creation was due to the purge against on Leanbox which lead most to flee to Lowee. Due to this, Lowee created a city for The Guild called "Guild City."

While the geographical structure and means of transportation remain unchanged, the world's history has. The Guild functions the same as it would in the Hyper Dimension and serves under the Basilicom. The original goddess and Arfoire are now two different beings, with the latter a human who used her power of copying to aid the legendary heroes.

Retrieved from "https://neptunia.fandom.com/wiki/Super_Dimension?oldid=61132"
Community content is available under CC-BY-SA unless otherwise noted.