Uni is Lastation's CPU Candidate. Nobody works harder than this girl, but because she is shy and lacks self-confidence, she struggles to communicate her true feelings.

Uni has red eyes and black hair worn in two pigtails that are tied up by two black ribbons with white stripes. She wears a black one-piece pleated dress decorated with white stripes at the bottom of the pleats. She also wears matching arm warmers and shoes with knee high black socks sharing the same color scheme as her dress.

Uni is similar to Noire in personality regarding some aspects such as the tsundere factor. Overall, however, Uni seems to be much friendlier and a lot less arrogant than Noire due to the inferiority complex she has from striving to be just as flawless as her older sister

Black Sister's hair stays in pigtails but becomes white and curls up while her eyes become a bright green similar to Noire's. In the upgraded version of her default bodysuit, Uni wears a a black and white two piece bikini-like bodysuit with matching shoulder length gloves and thigh-high boots with 3 inch block heels.

Black Sister's personality is identical to her human form though, as with nearly all the goddesses, she becomes a lot more confident in her abilities and more serious.

In the RPG games, Uni was a ranged character, and not much has changed. For game balance reasons, both her gun blast effect and recoil have been toned down, meaning her shots have less a stunning effect and she does not suffer too much of a pause between shots, meaning her best strategy is "spray and pray" at enemies.

She is effective at mid and long range combat, but has very poor flank defense, and she will be overwhelmed if surrounded. Her special attacks do mitigate this flaw somewhat by having a wide damage radius and range as well as doing excellent damage, so they can be used either to wipe out enemy groups, deal major damage to bosses, or simply to buy herself some breathing space if surrounded.

Her HDD form changes her gun blasts to be continuous fire in an arcing stream instead of being a series of shotgun like laser blasts followed by a spinning salvo finisher, making her far less likely to be attacked due to no longer suffering a pause at the end of her attack combos. 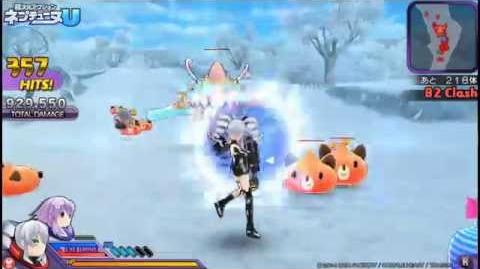 Retrieved from "https://neptunia.fandom.com/wiki/Uni/U:_Action_Unleashed?oldid=79533"
Community content is available under CC-BY-SA unless otherwise noted.