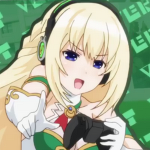 I'm a huge fan of video games, anime, and manga. I've been a fan of Neptunia since spring 2013, when I played the first game. I found out about it through an ad in Shonen Jump, and then went to Wikipedia to look into it. The series quickly became my favorite of all time, my favorite game being either Neptunia 1, Re;Birth1, or VII (I'll decide one day).

Retrieved from "https://neptunia.fandom.com/wiki/User:BoredCo2?oldid=53071"
Community content is available under CC-BY-SA unless otherwise noted.