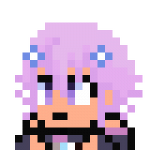 "If we need to find more information about the Neps, we'll have to dig even deeper."

I first discovered the series from various anime sites and gaming forums, and thought to myself "Hmm, this looks like if the Video Game Console Wars was turned into an anime".

Months after I got my first PS3, the first game I played was the original Hyperdimension Neptunia. Originally, I was supposed to play Hyperdimension Neptunia Victory, but for some reason, one of the employees at GameStop mixed up the disc of the third game with the first. At first I felt confused, but when I got home and turned on the PS3, put the game in, and started it up, It was a pretty crazy experience. My experience with the battle system in the game was almost confusing for me, seeing how different buttons do various attacks like using your main weapon, and doing physical and ranged attacks. And in order to use items or transform into HDD, you have to create a custom combo to trigger those commands. I got used to the combat system and I liked how you can create your own special move using a picture you have saved on your console and burn it onto a disc.

The day after that incident, I decided to go the GameStop at the mall near my high school to actually get the first game, then later after school, I went back to the GameStop in my neighborhood to swap the first game disc that was in Victory's case with the correct one. I know I went out of order by getting 1 and 3, but not the second one, because that game was rated for mature audiences, and I was 15 at the time so I just missed out. Got home, booted up the game, and suddenly got a different experience. It had the same characters, some characters from the second game, and some new ones from a different dimension. The story was pretty silly, had a couple of laughs, and the gameplay was much different from the first one. Somehow they made the battle system more accessible by adding options to either attack, do a special, transform, or use an item without having to rely on button combinations. This later became one of my favorite games on the PS3, making me want to buy more Neptunia games on the Vita, PC, PS4, and even the Nintendo Switch.

My favorite characters are (in no particular order):

Retrieved from "https://neptunia.fandom.com/wiki/User:Sammyrms1?oldid=81112"
Community content is available under CC-BY-SA unless otherwise noted.