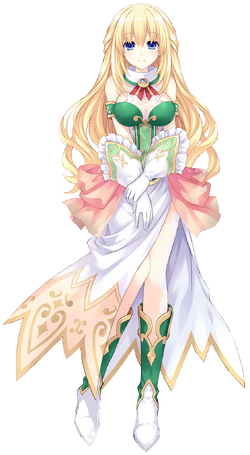 Vert (ベール, Bēru), also known as Green Heart (グリーンハート, Gurīn Hāto), is the Console Patron Unit (CPU) of Leanbox. She represents Microsoft Xbox home consoles, referenced through her appearance in both forms, her processor units, and some of her dialogue.

Due to the Neptunia series being a game that revolves around different universes and dimensions, there are multiple Vert's throughout the series though all of them retain more or less the same personalities and core aspects regardless of the setting.

When the idol group known as MOB48 appears, Vert and the other CPUs take on the role of idols to reclaim their lost shares.

Vert is a beta tester who has chosen the Enchanter class alongside an NPC based off of Vert's Goddess Form.

Vert is the fourth boss of the game and a playable character.

Vert appears as a wingmate.

On the Moshi Megami Ga Yome Dattara LoveLove Shichau Kamo Shirenai. drama CD, Vert has been neglecting her husband in favor of playing Four Goddesses online. After having achieved what she had been trying to do, she notices that her husband looks displeased and tries to think of a way to cheer him up.

Vert decides to allow her husband to take a bath with her and promises to wash his back. He is of course surprised by this, but Vert tells him not to be because married couples taking a bath together is a normal thing. This makes him happy and Vert is pleased at seeing how his mood has improved.

When in the bathroom, Vert begins to wash his back and can't help but notice how wide and masculine his back is, and how whenever she touches it her chest begins to beat faster and faster. She then scolds herself for having such inappropriate thoughts and blames his back for seducing her.

After washing his back, Vert decides to get in the bath while still wearing her towel due to being too embarrassed to take it off in front of him. Though after realizing that not taking it off is a breach of etiquette she decides to blindfold her husband with a towel. However, she then realizes he won't be able to see his way to the tub and guides him in. Vert then takes off her towel to get in but ends up falling into the tub which causes the blindfold to come off and thus allowing him to see her naked body. She then freaks out and tells him to pretend like he never saw anything. However, she sees a weak look on him. She then realizes he has a big nosebleed and is knocked out. Shocked by this, she tries to wake up her husband many times but is still knocked out.

On the Megami-Tachi Ga Soine Shite Kurechau CD Situation CD, Vert promises to sleep with 'him', after losing a video game to him. She goes to his closet after she strips and tries to find clothes. She sneezes, noticing how cold the room is.

In Volume 3, Vert was taken hostage by ASIC but Leanbox Special Mission Department saved her. Later Vert is Noire's partner in defeating ASIC in beach volleyball. Vert also takes part in fight against the Niio-Giio Land.

In Volume 4, Vert brings Word the Dolphin to investigate the series of bikini thefts, defeats ASIC as a member of Aragami. In the later part of the Volume 4, Vert and the goddesses befriends Rei Ryghts and deals with the consquences of befriending her.

In Touch Shot! Love Application Vert makes an appearance in the game as part of a custom skin that can be used on the main character's yPhone. The skin features her from Hyperdimension Neptunia mk2 and uses her Chirper Gamipic as part of the icons on the protagonist's phone.

In Mugen Souls Z as part of the Vert's Delusional Sisters Costume Set downloadable content, the player can obtain equipment that can allow Peons to dress up and resemble Vert. This DLC pack includes Vert's entire princess outfit, her hairstyle, her face, and a portrait of her.

Vert's costume, along with other goddesses, were made available as part of a collaboration.[1]

In Azur Lane, Vert, along with the other goddesses appear as one of the obtainable ships as part of the "Visitors from Another Dimension" collaboration.

Players can dress up their character as Vert as she appears in Cyberdimension Neptunia: 4 Goddesses Online by equipping the corresponding head and body gear.[2]

In Date A Live: Spirit Pledge, Vert, along with the other goddesses appear as one of the playable spirits and as a sephira as part of a 2-part collaboration, with her debuting in the second part.

Vert appears as a skin for Yssring Leavtruth alongside Blanc in the 2nd part of the collaboration.

Vert is a playable employee as part of a collaboration.

In Senran no Samurai Kingdom as part of a collaboration, Vert is a playable character along with other goddesses.[3]

Vert/verte is the French word for the color green. This can correlate to why Vert's appearance mostly consists of green on her clothing along with her divine name being 'Green' Heart. The reason green was possibly chosen as her name is due to the Xbox logo notably having the 'X' in the color green.