Vert is the Console Patron Unit (CPU) that protects Leanbox. She appears to be an elegant lady, but she's actually a hardcore gamer. After transformation, she loses her airiness and becomes calm and analytical. Her personality may not change as much as the other CPUs, but she does become more aggressive.

Vert bears the appearance of an adult woman, with a slender figure, sizable bust, and dark blue eyes. Vert's hair is blonde, and goes down to her waist in length. It is kept free, and is rather wavy. Her fringe is kept just above her eyes, and she has three sets of bangs; first going down to her upper-jaw, second, upper-neck, third, chest-length.

Vert's attire is a green and peach-colored dress, with the top being a dark green that has gold lining on it, and being sleeveless, as well as revealing a considerable portion of her cleavage, covered through a veil of sorts. She has a ribbon on her neck, which is red in colour, and has detached upper-arm portions of her dress's sleeves and has frilled gloves on her hands.

Vert is a very kind and mature woman who often plays the maternal role of the CPUs due to not having a sister herself. she is shown to be very caring to others and very wise, but can also be playful at times as well. She is shown to be the most level headed out of the goddesses at most times. She could care less about the Console Wars, preferring to play video games, and as a result, is non-aggressive towards Neptune.

As Green Heart, she now has purple eyes and her hair remains long and is of different shades of green. It is kept in a ponytail, her fringe is normally seen above her eyes and her bangs are thick and caress her face. Her attire is a white bodysuit that is open in the middle, exposing her stomach and underside of her breasts. Her sleeves are detached and are white and black in the entirety. Her gauntlets are longer than the other CPUs with it covering the majority of her forearms with ease.

Green Heart's personality is typically the same as her human form albeit just a bit more serious than before but still with playful tendencies here and there, especially when it comes to her bust size. Blanc falls victim to her teasing the most.

During the battle in Celestia for the title of True Goddess, Vert proposes the idea of defeating the one out of the four of them that they deem to be the most difficult to fight. This leads to Vert, Noire, and Blanc all teaming up against Neptune and banishing her to the world below before returning to their own nations.

When Vert learns about Neptune's presence in Leanbox she fights her in her goddess form under the misinterpretation of Neptune being up to no good from Yvorie. When she learns of the corruption surrounding the Basilicom as well as about Jade trying to start a war between the Aristocrats and Basilicom, she accompanies Neptune and her party to investigate the matter. During this time she also develops a bond with IF, even so far as to call her by her nickname "Iffy." After successfully managing to stop the battle between the Aristocrats and Basilicom, she gives Neptune information on where she may find the Key Fragment.

The Path to Celestia

When Neptune returns to ask Vert for her help in the battle against Arfoire, she declines saying that she must stay and protect her nation. When Neptune returns for the second time to ask her (this time with her memory) Vert faces off against Neptune and overheats which allows them to make her join.

Vert accompanies Neptune to Celestia and helps defeat Arfoire. In the normal ending she says that she'll be returning to Celestia but in the True ending she gives up her powers to live her life as a human along with the other CPUs after ridding Gamindustri of all the monsters. 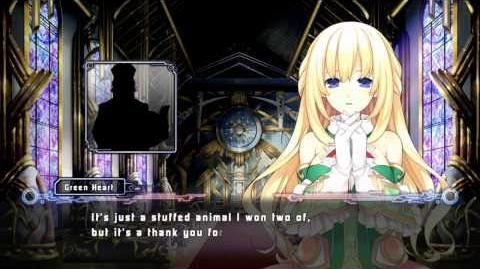 Retrieved from "https://neptunia.fandom.com/wiki/Vert/Super_Dimension?oldid=86431"
Community content is available under CC-BY-SA unless otherwise noted.